Lancefield is a town in the Shire of Macedon Ranges in Victoria, Australia 73 km north of Melbourne and currently has a population of roughly 2500 people.

The area was used by the indigenous aboriginal people as a quarry site for the manufacture of stone axes and was first settled by European squatters in 1837. The main source of these stone tools was at Mount William, to the north east of Lancefield.

Lancefield’s elevation and climate made it a popular summer resort in the 1880s. In recent years, many local wineries have been established in the area.

The town has a connection to the Kelly Gang; for it was here that Constable Fitzpatrick, the instigator of the Kelly Outbreak in 1878 was finally found by the Victorian police to be no good and for his actions was finally discharged from the force.

Lancefield district had a reputation for some of the best fertile soils in Victoria. Prior to being cut up into small blocks during the early 1970s the region produced high yields per acre of potatoes, fat lambs, fat cattle, wheat and other cereal crops.

A large fossil deposit from the Pleistocene epoch was discovered at Lancefield Swamp, containing the remains of many species of extinct megafauna, including ; Macropus titan, a giant kangaroo; Diprotodon, a rhinoceros-sized wombat; and Genyornis, a giant flightless bird.

Golfers play at the course of the Lancefield Golf Club on Heddle Road.

Find something special for a loved one back home at a local bookstore, gift shop, or gallery.

Wander through the 3 levels of antiques and art inside the striking ‘Macedonia’ building that dominates the main junction into town.

Need to fill your shopping trolley? Pop into the Lancefield Providore for ultra fresh fruit and veg, flowers, a juice bar, deli items, gourmet pantry items and more…  The Lancefield and District Farmers Market runs on the fourth Saturday of every month (except December, when it runs on the third Saturday) from 9:00am – 1:00pm on the Centre Plantation of historical High Street, Lancefield. Why not stay for a lunch or dinner of old-fashioned pub grub and a chat with locals at the Lancefield Hotel.

Vineyard altitudes in the region range from 300 to 800 metres above sea level making it cool to cold by world standards.

Most of our producers are boutique and family owned – lovingly producing signature wines with some using age-old techniques. The popular varieties of the region are delicate sparkling wines, refined chardonnay and award winning pinot noir. In vineyards surrounding Lancefield, Romsey and Trentham delicate floral aromas can be found in the wine due to slow ripening during cool autumnal temperatures. As we move beyond Kyneton toward the rocky outcrops to the Cobaws more robust styles can be found with Shiraz and Cabernet.

Hanging Rock, only 15 mins from Lancefield by car, rises 1505m above sea level & is actually a small steep sided volcano.

Popular with picnickers & walkers. Why not stop in at the Hanging Rock interpretative centre for the lowdown on local history, mystery and geology or join a guided tour for more tales, and spook yourself with a summer night tour!

Picnic Country Races are held twice a year on New Year’s Day & Australia Day local food and wine is the hero at the annual Harvest Picnic in late February. 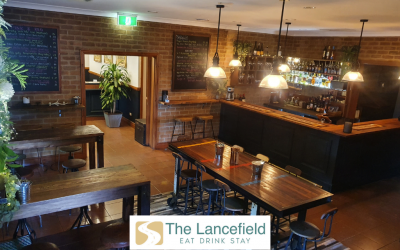 At The Lancefield Lodge